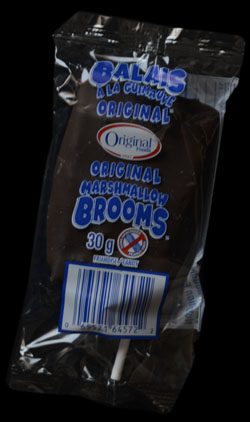 I have to be honest; I was pretty sure that I was going to completely hate this candy. There's really nothing on paper about this treat that I should like. I generally dislike marshmallow treats and these Marshmallow Brooms look really poorly made. At the very least it only vaguely looks like a broom, not to mention how strange it is to theme a candy on an object you clean your house with. In general, I had very little hope when I got this candy, but since it's a classic treat (at least in my neck of the woods) I figured I'd give it a shot.

The strange thing was, I didn't hate it at all. It certainly isn't going to make this year's best candy of the year award, but it's actually not too bad. The main relief for me was in the marshmallow filling. It wasn't your standard marshmallow, which I often don't like. Instead this marshmallow was like a slightly sticky, light whipped nougat. It was far less spongy than most marshmallows, and that's a good thing in my book. Second, although the theme and shape are a little strange for a candy, I found it very easy to eat.

Flavour wise the chocolate dominated entirely, which isn't all bad since the chocolate was OK. It wasn't the best chocolate I've ever eaten, but it was a lot better than what I expected it to be. The only real fault I could find with this bar is the stick, and the problem of getting the sticky marshmallow off the stick. This is a classic candy, and while it's not amazing, it's also not horrible either.